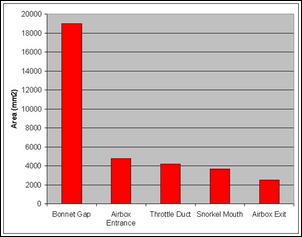 As can be seen in this graph, the cross-sectional area of the bonnet gap is huge relative to the others. (But all may not be as it seems – we’ll come back to this in a moment.) In fact, with them all on the same graph it’s a bit hard to see what’s what.... 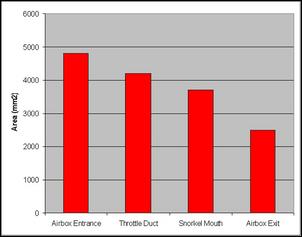 ...so let’s delete the bonnet gap area from the picture. On the basis of these figures, the airbox entrance is least in need of change, however the airbox exit duct and the snorkel mouth could both do with changes. After those, the throttle duct (the twin pipe system) would be the one to change.

However, if it were all this easy, the hairy horribleness of negative pressures would be simple to find. And often they’re not. Take that airbox outlet duct, f’rinstance. Back in 1998 we tested a bunch of airboxes on the flowbench, including this very same EF Falcon design. In comparison to an AU Falcon airbox, which doesn’t use the long internal snorkel but has a larger exit, the EF Falcon airbox out-flowed it by 18 per cent! So maybe this design actually works – as opposed to just looking a bit average. Or maybe the flowbench – working at just 1 inch of water pressure differential – couldn’t suck enough air through the box to get really meaningful figures? The answer is to get out the manometer or Dwyer meter and do some real world testing. 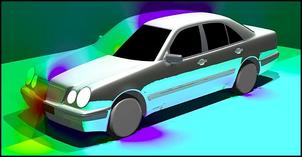 And here’s another one for you to think about. The intake area of the gap between the bonnet and the bumper/headlights is large – in comparison to the other cross-sectional areas, huge in fact. But hold on, it’s also directly connected to the flow over the front of the car – the flow of outside air. And airflows wrapping around the curve of the leading edge of the bonnet often generate a low pressure area – exactly what you don’t want at the location of the engine air intake! So despite its cross-sectional area being large, the fact that it’s nowhere near the stagnation point (the location of max pressure, which typically is about halfway down the bumper), may be harming intake airflow heaps! Again, get out that manometer or DMDPG...

And that’s just what we’ll be doing next week.

Did you enjoy this article?